The oversized work of Hermannsburg by Hubert Pareroultja, ‘Tjoritja’ capturing the West MacDonnell Ranges with just a hint of Billy Benn in the mountains

“Global debates on race and ethnicity are reflected in the prominence given to Indigenous artists in this year’s award,” was a reflection of Sydney Morning Herald critic John McDonald after the launch of this year’s Archibald, Wynne and Sulman Awards at the Art Gallery of NSW. Do you think it could suggest that the racial origins of the artists (or their subjects) could be a determining factor in the selection of finalists by the august administrators of the Gallery?

But certainly, the clearest element of First Nations selectivity this year is that the very first Indigenous artist won the Archibald Rank’s first cab – the infamous Packers’ Prize. It’s chosen by the guys who receive, unpack and manage the 2,565 entries for all three categories – an all-time record – though that still derides any hope that the artwork will win the main prize later!

So Wongutha / Yamatji actor, playwright and (in his spare time COVID) artist, Meyne Wyatt’s self-portrait wearing the look of disdain we experienced when he gave a wonderfully acidic speech from his play, “City of Gold” on the ABC ‘Q&A ‘ TV program, is theoretically doomed to failure. But, in a year when seven of Archie’s 55 finalists are Indigenous, why not turn the tide?

Of course, the Aboriginal Art Directory invariably takes the award of the Wynne landscape much more seriously than the Fashionable Archie, simply because the landscape is an essential aspect of any First Nations artist’s range of subjects – it is the countryside after all. And here, 15 of the 34 finalists are Indigenous – almost half. Of course, at least one of them will win something, as the recently established Roberts Family Prize is only for ATSI artists.

So, what stands out? Well, you can’t miss the ‘of Hubert PareroultjaTjoritja‘, a powerful sweep from the West MacDonnell Ranges. This canvas is an image worthy of Albert Namatjira but widely spread with confidence in the stratosphere, given the bold acrylic hues but retaining the familiarity of old Albert’s wise old white eraser on the left side.

Standing in the middle of the show, collaborative rival ‘Seven Sisters Songline‘the webs stand out violently in your vision. Alec Baker and Peter Mungkari don’t quite harmonize their different styles in one, but Keith Stevens, Taylor Cooper and Witjiti George really blend together. Oddly enough, the much quieter version of Leah Brady invades you the more you walk around. But it’s Nyunmiti Burton’s Red Star / Amata Sister Explosion that probably wins my favor.

I’m afraid Yakultji Napangati and George Tjungurrayi’s Papunya Tula selections may not be noticed alongside all this APY fervor. But a surprising selection of three bark stands out for its difference. My favorite would be the delightfully titled Mulkun Wirrpanda ‘Pardalotes nesting inside a termite mound‘! Countryside??? Well, for sure if Timothy Cook is too familiar ‘Koulama‘- depicting the Tiwi yam / moon ceremony – is also one. And the unknown man from Gumbaynggirr / Bundjalung, Otis Hope Carey’s ‘Ngalunggir minggi / Healing Spirit‘may seem to lack anchorage on dry land!

Oddly enough, the Wynne Prize also incorporates sculpture – and may well have its first indigenous example this year in Paul Namarinjmak Nabulumo’s larrikitj post with the rainbow serpent ‘Ngalyod to Kubumi ‘.

Finally, the incomprehensible Sulman Prize “for a genre painting, a subject painting or a mural project” managed to include two indigenous works, both naive scenes, by Doris Thomas and Grace Kemarre Robinya. Thomas’s “Day and night, Titjikala retreat day” is a funny image of an all-too-familiar scene – the long queue to collect pensions by, apparently, the 200 residents of this community in southern Aranda.

Return to the famous Archibald. What chance for a First Nations winner to get out of the incredible 1068 registrations? John McDonald’s shrewd eye goes for Vincent Namatjira’s messy double portrayal of himself and Adam Goodes – one of three finalists at the prolific Iwantja Art Center in Indulkana, just down the dusty road from Titjikala. I think Namatjira made much better versions of himself – in Hazelhurst’s’Soldiers‘and winning the Ramsey Prize in Adelaide. And if selfies are all the rage, there’s the effort of Meyne Wyatt and former Sulman winner Kaylene Whiskey delivering a wacky pituri-assisted reunion with a slim Dolly Parton, all of her usual superheroines and, well. sure, the necessary plants. His fellow Indulkanan, Tiger Yaltangki also has a self-portrait, although I don’t think he was looking in a mirror at the time!

Meanwhile, Charlene Carrington is all the rage after her mother Bessy Daylight portrayed their mother in the Telstras this year, now painting their father, Churchill Cann in the familiar ochres of the Warrmun community. And Blak Douglas seems to have aged Dujuan Hoosen, the child star of the doco, “In my blood, it flows” in his menacing portrait of a giant disembodied head. 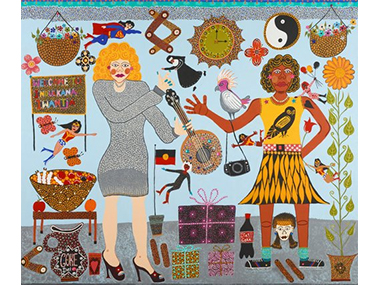 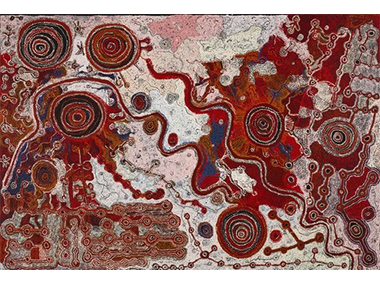