Kuru Ala ‘(2016) a key part of the story of the Seven Sisters, where Wati Nyiru looked down on the Sisters, painted by the Spinifex Collaborative: Estelle Inyika Hogan, Myrtle Pennington, Ngalpingka Simms, Lorraine Davies, Debbie Hansen, Tjaruwa Woods

The National Museum of Australia is the pioneer Songlines: Tracking the Seven Sisters The exhibit will tour the UK in 2021. Here’s what I thought of curator Margo Neale’s original exhibit at Canbarra in 2018: https://news.aboriginalartdirectory.com/2018/02/songlines -tracking-the-seven-sisters.php

Gasket “UK / Australia season” The initiative from the British Council and our Department of Foreign Affairs and Trade will help support Australia’s leading performing arts companies, with the government providing $ 350,000 to support the tour.

The Song lines The exhibition is a unique cultural asset and the first of its kind, using indigenous techniques of imparting knowledge in an exhibition space. And that UK space will be at The Box in Plymouth.

Minister of Foreign Affairs, Senator Marise Payne said that the ‘UK / Australia Season‘will examine the topic’ Who are we now? ”, Examining the shared history and culture of the two nations. “Australian government support will build on Australia’s cultural reputation, promote international relations and develop cultural understanding. This exhibit will be particularly useful in maintaining our strong multigenerational ties with Britain at a time when overseas travel is extremely limited, ”said Minister Payne.

The Melbourne Symphony, the Australian Chamber Orchestra and the Australian World Orchestra will also present innovative productions to showcase the best of Australian artistic innovation, integrity and collaboration. Works for children and young people will be presented via the Sydney Dance Company, circus performances from Circa, as well as performances and masterclasses by the Queensland Ballet.

Trade, Tourism and Investment Minister Simon Birmingham said fostering links through arts and culture would help strengthen Australia’s already strong bilateral relationship with the UK, especially at a time when a trade deal is being negotiated with the newly independent UK.

“This is an incredible opportunity for some of Australia’s most remarkable artists, performers and exhibitors to participate and promote Australia as a diverse and talented nation,” said Minister Birmingham. “The ‘UK / Australia season’ develops a collaboration between our nations that builds on our commitment to further strengthen our partnership as we continue to negotiate a free trade agreement. “

“There is a strong interest in Indigenous art abroad and Song lines will help increase audiences and foster new markets for Aboriginal and Torres Strait Islander artists, ”added Communications, Cybersecurity and the Arts Minister Paul Fletcher.

The Season will take place in the UK from August to November 2021, and Britain’s yet unannounced reciprocal season in Australia from September 2021 to March 2022.

The theme “Who are we now?” Provides a platform to celebrate the best of our artistic and cultural life, with points of connection and collaboration around our common successes, say the Poms.

I must admit that I was disappointed with the news that the important ‘Song lines‘was heading for The Box in Plymouth – an unappealing title in what I had always considered a marginal city. But then I read: “The opening of The Box is the most important cultural initiative in the UK in 2020. Galleries, collections and archives will bring the world from Plymouth and Plymouth to the world. The original Municipal Museum and Art Gallery have been completely remodeled and expanded to combine the Edwardian building with the old Municipal Library and St. Luke’s Church. The Box also has an astonishing ‘archive in the sky’ with research and learning facilities, as well as a major new public square for concerts, performances, theater and events ”.

And the opening this year has given Plymouth (and the world) a chance to remember some of the events that took place in this city 400 years ago. For The Box is home to the flagship project of the ‘Mayflower 400’ commemorations – just started. Impressively, they went to America to examine the effect of this little trip to lands across the Atlantic – both the Native Americans whose 12,000-year-old residence was brutally invaded, necessitating the creation of the exhibit in partnership with the Wampanoag Advisory Board for Plymouth 400 in Massachusetts, and with assistance from over 100 museums, libraries and archives in the UK, US and the Netherlands; and a thousand descendants of the Mayflower sailors.

I wonder if Whitby in Yorkshire bothered to commemorate the 250th anniversary this year for another nautical company?

And in other news released late by the National Museum, Songlines will move from Plymouth to the Humboldt Forum in Berlin at the end of 2021, then to the Musée du quai Branly in Paris in 2023.

“The partnership between the Stiftung Humboldt Forum and the National Museum of Australia on this project is a chance to showcase the Australian continent, seldom seen in exhibitions in Europe,” said Dr Harmut Dorgerloh, Managing Director of the Humboldt Forum . “The exhibition, which innovatively uses technology to preserve and present indigenous knowledge and history, represents two key issues for the Forum Stiftung Humboldt: the digital preservation of cultural heritage and innovative musicological approaches,” he said. -he adds.

“I am delighted with the collaboration with the Martu, Ngaanyatjarra and Anangu Pitjantjatjara Yankunytjatjara peoples. This groundbreaking exhibition will pave a new way for the ethnology museum to work with local communities, ”said Lars-Christian Koch, director of the Berlin Museum of Ethnology, where the exhibition will be presented.

Songlines will be presented at the Musée du quai Branly, Paris, from April 2023 to July 2023. “Particularly innovative and spectacular, the exhibition remains above all a place of transmission of knowledge rooted in the tradition of the three deserts of the West. Australia (and SA) and emanating from their stellar artistic forms, ”said Emmanuel Kasarhérou, president of the Quai Branly museum.

After Paris, the exhibition will continue its world tour, with plans underway for trips to North America and Asia.

And let’s not forget that the Tarnanthi Adélaïde festival has currently spread its wings at the Musée des Beaux-Arts in Rennes, capital of Brittany in northwestern France. This “Kulata Tjuta” exhibit was supposed to include the title’s “Many Spears”, but COVID denied it the artists needed to install the spears. Instead, 34 APY artists were painting furiously, and their canvases are now in France. A trilingual catalog – English / French / Pitjanjatjarra will capture the effort.

And incredibly, not announced by the National Museum, ‘Songlines: Tracking the Seven Sisters’ is about to open in Perth at the new WA Museum Boola Bardip. Some disputes over the opening – maybe November 21, but more likely November 30 as that is the date proposed by the WA Museum.

How wonderful that this important spectacle has a continuous life! 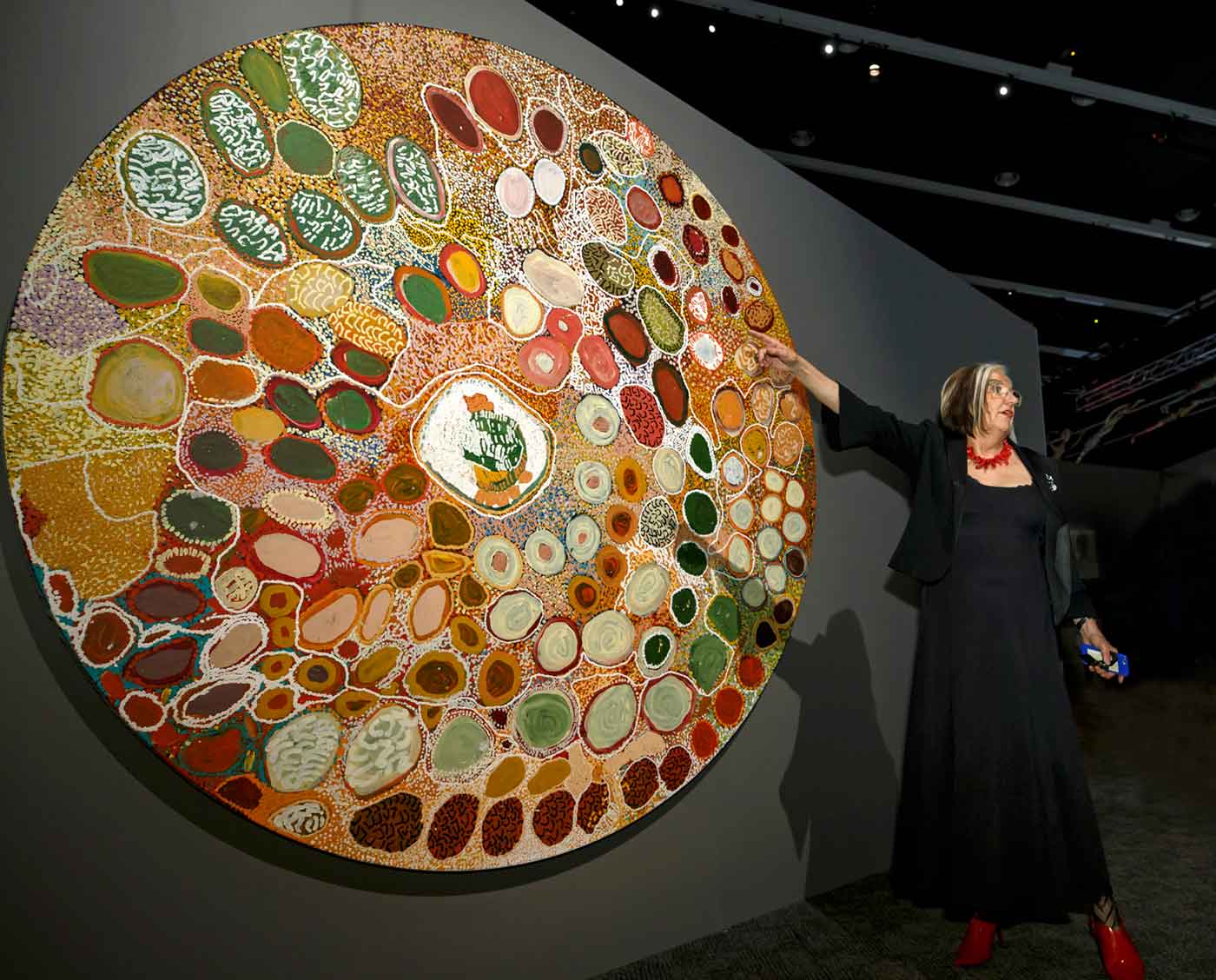 Curator Margo Neale with the painting “Minyipuru at Pangkal” by Mulyatingki Marney, Nancy Nyanjilpayi Chapman and May Wokka Chapman from Martumil Artists 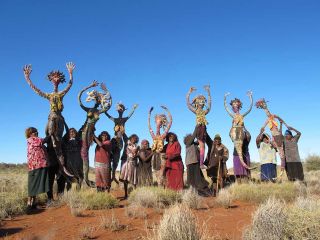 The weavers of the Tjanpi desert “steal” the Seven Sisters to escape the clutches of Wati Nyiru, pursuing them “relentlessly priapic”