Artist Paul Klee is famous for saying that drawing was like “taking a line for a walk”. Can you take a song for a walk? English writer Bruce Chatwin seemed to think so after a short-lived visit to our deserts – let’s go, sing along and you’ll find your way like you have a map.

It’s much more complex than that. As National Museum curator Margo Neale showed when she set up a First Nations desert curator to tell us about their versions of the ‘Seven Sisters Songline’ in 2017 – an exhibit which is now on view at the New Perth Museum. She just added a few thousand words of interpretation to it in collaboration with science scholar Lynne Kelly under the somewhat stupendous title ‘Songlines: The Power and the Promise ‘.

But they don’t have anything about the complexity revealed by the Gay’wu women’s group from their homeland Bawaka, Gumatj Land, Yolngu Country, NE Arnhemland. Calling itself after the ubiquitous Dilly bag – which keeps coming back in my life lately; throughout Tarnanthi’s recent exhibition in Adelaide and in the film ‘Heights’ – that Yolngu refers to the founding beings of Yirritja, the Djan’kawu Sisters. They created the country, the people, the animals, the plants, the birds, the law, the language and the knowledge … and of course, backpacks to contain not only the food that the women gather, but their inherited knowledge, their dreams and ceremonies.

As you may have deduced at this point, the literal for Yolngu also includes the metaphorical, the intangible, the unfathomable. Well, unfathomable for us, but a walk in the park for those who grew up with the powerful traditions and rules of the Yolngu, who couldn’t imagine the simplicity of whitefellar family trees when they have the surprisingly intricate spiral patterns of Gurrutu (given a multimedia interpretation at the 2019 Tarnanthi Festival) in which all human relationships and most non-human relationships can be defined.

Perhaps the best way to grasp this complexity is to study the Gurrutu spiral (like the entrails of a seashell) that appears in the book to introduce us to the four sisters – Laklak, Banbapuy, Merrikiyawuy and Ritjilili Ganambarr (the big green D for their half Dhuwa) and the daughter of Laklak Djawundil (the big Y for Yirritja above) who have come together to produce this book with non-Indigenous academics Sarah Wright, Sandie Suchet-Pearson, and Kate Lloyd.

In fact, they originally got together to develop a tourism business, but realized they had a duty to go further, coming from the crowds who had painted the church signs to show Christians what ‘they also had a powerful religion, and went to the Bark petition in the Canberra Parliament to say that this was their land and that it could not be simply handed over to a mining company by distant bureaucrats. Unfortunately, it took a long time to integrate; but painting the stories of their Gulf of Carpentaria coastline more recently has succeeded in persuading the courts that they should have maritime rights as well as land rights.

Next step, the sky. Because Songspirals – their favorite word for Songlines – also stretch from land to sea to sky. All are countries, with identifiable geographies and histories. The Sky basically explains how stars, weather, and winds affect life on the ground. And, like the NMA ‘Song linesAs the book amplifies, the seasonal movements of this black hole in the sky identified across Australia’s First Nations as the black emu can tell the Kamilaroi a lot about weather, plant development and animal activity.

But, back in the world of endless spirals, women mix their unique feminine desire Milkarri songs with family issues, starting with their mother Gaymala – eldest daughter of the legendary Mungurrawuy Yunupingu and thus beneficiary of a “deep knowledge” on her part – and its links with all the songs and stories about Wuymirri the whale. The granddaughter Magnolia (Maminydjama) is a stunning role model – and thus the clan’s Guwak, or koel, a messenger carrying Songspirals around the world. Sister Laklak is related to Wititj, the Dhuwa Rainbow Serpent (who, of course, lies down in a spiral) because her mother encountered a large snake at a waterhole just before she was born. She is the keeper of the stories, but suffered from a brain tumor and lost all of her English. Despite this, she earned a doctorate from Macquarie University and the tribal award of a sacred digging stick – important because it, like the backpack, came from the Djan’kawu sisters. But it was stolen by men with the matriarchal authority of Yolngu women! Now he had returned.

The book is therefore described as “a corrective to things written by men and non-natives”!

Not that the English language of Laklak is of great use in translating the Milkarri from her Gumatj dialect of Yolngu Matha – because “English is like speaking backwards,” says one sister; “This is so specific” when the words Yolngu all have many meanings and only a follower can fully appreciate the context in which they are intended. Despite this, we white people reading the translations of five Milkarri in the book are actually part of the Songspiral. Indigenous inclusion is so generous.

And these traditional ladies – all of whom have had meaningful careers – are inclusive enough to hand over their Milkarri to future generations as pop songs. Their grandsons group, East Journey took over with a Guwak / koel song (also the title of their 2012 debut album) that includes lines like, “With these tips I’m going back to the River of Stars, for my spiritual land ”- not exactly Tame Impala!

In addition to tripping over the missing spirals of their ‘Song lines‘, Neale / Kelly’s book contains a lot of interest, with an overall philosophy that learning these songs is learning Australia – for all Australians. They emphasize the importance of orality – preferred by far over the illiterate, a term that sounds like a devaluation for a society that can tell stories 37,000 years old. Because this is what a description of the eruption of Budj Bim (Mt Eccles in Victoria) could be. And they say it’s mnemonics training that achieves this miraculous feat, not just any difference in intelligence.

The words archive and archivist become important – although the difference between the objectivity of the Whitefellars and the subjectivity of the First Nations is emphasized. For Indigenous archivists, who can also be artists, “don’t just keep archives: they interpret and enrich them, engage in them creatively to keep them alive or to keep their knowledge relevant and active. in the present “. With a site, the archivist “activates the knowledge it contains by transporting part of this knowledge to that site and taking away an enhanced experience of that knowledge. A mutual transfer of knowledge occurs between the place, the person and the story ”.

And it is essential in the interpretation of this story on canvas or bark that abstraction be employed, offering the same multiplicity of meanings as language.

Comparisons are then made with other indigenous peoples – from the Zuni of America describing a route through the shrines encountered along it, to the islanders of Trobriand able to pass on instructions to build a canoe while singing.

‘Song lines‘by Thames & Hudson is actually the first volume of a National Museum’s’ First Knowledge Series’. A future volume is intriguing, bringing together Bill Gammage and Bruce Pascoe to discuss’Country‘. ‘Song lines‘sells for $ 20.

‘Spiral songs‘is a little older and was shortlisted for the NT Chief Minister’s and Victorian Prime Minister’s Literary Awards last year. Coming from Allen & Unwin, it’s worth every $ 35 penny. 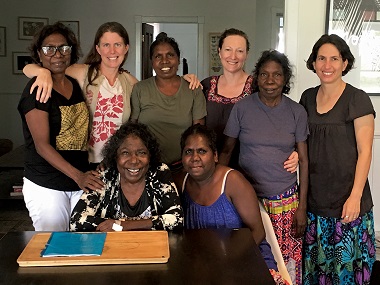 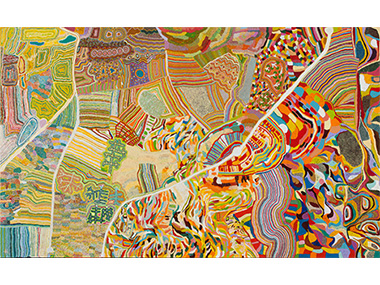 Martu’s collaborative painting, ‘Yarrkalpa / Hunting Ground’ (2013) which forms the inside covers of ‘Songlines’, both educating young Rangers on Country Hunting and illustrating the ‘Seven Sisters Songline’