The 1972 “Dream of Water” by old Walter Tjampitjinpa, the man who authorized the wall designs of the Papunya school

In 1971, a revolution took place in the most unlikely place. The remote and government-built desert community of Papunya was full of Pintupi, Warlpiri, Luritja, Aranda and other tribes who were increasingly reluctant to meet the official assimilation deadline. They knew they had a strong culture and law and didn’t need the Whitefellar versions. But the importance of secrecy in their culture – even among the uninitiated of their own linguistic group – had encouraged a reluctance to reveal everything.

Now, due to a variety of factors (best explained in the superb ‘TjungungutjaNT Museum and Art Gallery catalog), they decided to make a last ditch effort to reveal their inner strengths visually. Yes, the late Geoffrey Bardon was an inspiration in encouraging his students to paint “the Native way”; and then allow mature men to paint a mural or two on the walls of his school. But several of them had already experienced the Yuendumu Men’s Museum, which introduced the idea of ​​bringing in art and artifacts from distant ceremonial sites, now that indigenous peoples were stuck in residential communities. And a pocket dynamo like Kaapa Tjampitjinpa had already seen his painting successfully exhibited at the Alice Springs Art Prize.

That this silent and largely unsuccessful revolution – for few wanted to buy this “art” which was not as ethnologically pure as Arnhemland bark and used acrylic paints of whitefellars and not ochres – should continue to be hailed as “the last great artistic movement of the 20th century “by the great Robert Hughes (although no one has produced proof that he actually engaged in this quote) is almost a miracle. The Heidelburg school and the Angry Penguins are the only possible comparisons in Australian art.

And the ramifications of this revolution – which slowly spread from deserts to the Kimberleys, then to the reluctant lands of Pitjanjatjarra – have been enormous. The status was returned to the elders of the community; money was made that was not just “assisted” funds; the younger generations were reintroduced into the stories that had sustained their people for eons; the whites were able to invest in an attempt to understand the culture of the First Nations; all the politics of native Australia were about to change.

And yet, 50 years later, no major Australian artistic institution is celebrating! I can’t find any plans for a large exhibition, and Papunya Tula Artists – the first community art center that has become a model for the many that now exist in the country – tells me: “Nothing concrete (by means of a celebration) at this point, things could take shape later in the year.

It might not help that the PTA was founded in November 1972 – soon enough after the art started flowing, but not in 1971. And that speed certainly reveals how much artists felt the collaborative nature of their business and the need to control themselves. As a result, PTA organization has often been confused with the art movement – as in the NSW Art Gallery Olympic Exhibition in 2000, ‘Papunya Tula – Genesis and genius‘and Vivien Johnson’s masterful book,’Lives of the artists Papunya Tula‘.

It should come as no surprise, then, that the only exhibition to note this major development in Australian art is arguably titled ‘Papunya Tula: 50 years old. It has just opened in the excellent SH Ervin Gallery in Sydney and is organized by commercial gallery owner Christopher Hodges, whose Utopia Art Sydney gallery has exhibited and sold PTA art works since 1988. This long association has made it possible to ‘access private collections across Australia for the exhibit, assembled at a time when institutional lending has been tricky thanks to the pandemic.

Unfortunately, it’s not really the exposure that the occasion deserves. There is no catalog and few attempts to contextualize art or history. The only map on display seems to suggest that Papunya is still the pivot of the painting when in fact the artists have moved to points further west that don’t even appear on the map. In addition, compared to large gallery exhibitions such as’Tjungungutja‘in the NT, the AGNSW show and’Tjukurrtjanu‘In Melbourne, the quality of the work exhibited is hardly in the foreground. To begin with, for example, viewers are greeted upon arrival by an undated mid-career Anatjari Tjakamarra when his early works paved the way for Papunya’s painting and surely deserved a place here. And then we move on to the powerful contemporary works of Yakultji Napangati and George Tjungarrayi in the current op-art style as if there was nothing in between.

Yes, there are some fine early boards out there, so easily rejected by the market from the start until auction house Sotheby’s digs them up and earns their owners (not artists) six-figure sums. A Charlie Egalie gem from 1976 shows that not all artists took to the canvas when PTA started offering them, using colors that seem straight out of the desert. A charming Old Walter Tjampitjinpa captures all the flow of a classic water dream without a hint of blue or green. Next to it is a frankly phallic Billy Stockman ‘Untitled‘1971. And a poetic Mick Namarari receives the title (did he call it that?), “Kangaroos sleeping in the rocks‘.

But who could caption a work from that time, ‘Fear‘? Surely only the inventive Charlie Tjaruru, who would have the first solo exhibition of an artist from Papunya in 1987 and later continue to work with Marina Abramovic, and perhaps introduce her to the idea of ​​silent contemplation of another. In 1978 he painted “Fear and cold” which was associated with the mythology of the ice man of Tjitururnga. Tjaruru’s 1990 work in SH Ervin is another experiment, eliminating a series of linked circles in a way later employed by Billy Thomas at Kununurra.

His ‘Yam Dreaming Special: Fear ‘ appears on a solid wall with the early works of super stars Kaapa Tjampitjinpa, Uta Uta Tjangala and a ‘Dreaming of water’ by Johnny Warangkula.

As we progress through the years – but not necessarily chronologically around the gallery walls – an undated and untitled Namarari color field work is surely one of his well known. ‘Marsupial Mouse Dreams‘, there is a classic Ronnie Tjampitjinpa from 1989 and three mosaic works from the 80s by Uta Uta Tjnagala, Joseph Jurra and’ Nolan ‘Tjapangati. I suspect he’s better known as Billy Nolan; just like ‘Tjinkiya’ Napaltjarri is generally referred to as Tjunkiya – one of the strongest female works in the series. Mind you, there’s a super Doreen Reid Nakamarra, whose haunting dunes could have appeared even better flat – as they did at a recent Sydney Biennale.

Meanwhile, two huge walls are occupied by a slew of small canvases of the kind I associate with those painted for the Christmas market. It certainly offers a picture of the variety of patterns that exist in daddy art today, and gives a presence to younger artists; but it would be surprising if anything small could reach the depth that a large canvas offers a seasoned artist.

So congratulations to the National Trust at SH Ervin and Chris Hodges for bringing this important anniversary to our attention. Hodges is quoted as explaining: “This is a unique collection of over 80 artists that reveals the breadth of talent and participation. It shows an artistic movement that moves through generations, family ties and history ”. I just wish Hodges had the resources that a major institution could have offered to run this celebration more effectively.

I just recalled that the SH Ervin Gallery has a heroic history in the field of Aboriginal art. They showed the first exhibition of Utopia paintings in 1989, Rodney Gooch’s “Summer project”, who introduced the immortal Emily Kngwarreye to the world. 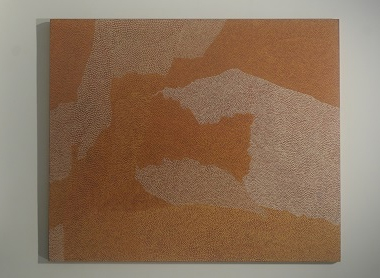 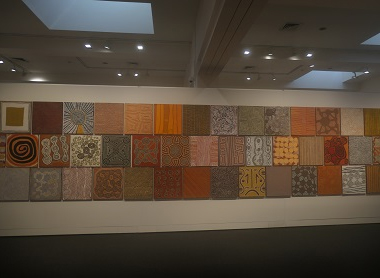