The ‘Ambassador’ case in the museum’s new foyer – featuring the 20,000-year-old stone ax on the left and two Gadigal hooks on the right

As the venerable Australian Museum reopens after extensive renovations, it is also challenged by the University of Sydney’s brand new Chau Chak Wing Museum. Dr Chau, who already has a surprising building named after him at the University of Technology, helped fund the Sydney confabulation of three existing (and rather lost) institutions – the three generations of Macleay’s natural history collections, ethnography, science and history photographs which actually began before the Australian Museum Collection, the Nicholson Collection of Egyptian, Greek and Roman Antiquities dating from 1860 and the University Art Collection.

Surprisingly, the Uni has accumulated just under 444,000 articles in its short existence (compared to the uni of Salamanca and Oxford). And a sparkling new building designed by Johnson Architects Pilton Walker will now offer a tiny proportion of that number for display at any time and attempt to unite these diverse collections into one multidisciplinary institution.

And that’s what I found exciting. While each collection has a dedicated room, curators constantly challenge the imagination elsewhere by pushing boomerangs, Egyptian mummies, and John Wardell Power’s distinctive Modernist paintings nearby. First Nations artefacts from the Macleay collection of 16,000 objects are given priority, with nine dedicatedAmbassador‘cases scattered throughout the museum – eight of which belong to the same linguistic group, while the entrance foyer mixes the linguistic regions of Deerubin, Wiradjuri, Bardi, Iwaidja and Gadigal.

Deerubin / Dyarubbin? It’s a word we’ll hear a lot more when the recent “People of the river” by Grace Karskens goes out and goes (review to come). Could he replace the ubiquitous Gadigal? For this is the real name of the Nepean / Hawkesbury river system that embraces Sydney before colonialists attempt to appease the distant masters of the UK by imposing their names on a feature of the landscape so well understood and named. So why not bring out a nearly uncharacteristic Stone Deerubin hand ax from Penrith Lakes, only about 20,000 years old, in this fireplace cabinet?

But I wonder how many will appreciate this antique next to the elegant sculpture of the Egyptian goddess Hathor in red granite, barely 300 years old?

And then there is a huge room containing 350 works by more than a hundred artists from three large Yolngu communities who offer ‘Gululu dhuwala djalkiri – Welcome to our ancestral footprint on earth ‘. There’s everything from a sailing canoe (by David Malangi) to a fascinating horizontal display of “bark” that dates back to the days of collecting anthropology students at Berndts in the 1940s. Some, controversially, don’t are painted not on bark but on masonite – challenging the local law according to which the sacred can only be represented on material from the earth. But the great Narratjin, who had just escaped the Japanese bombardments, could affirm that the radar tower which fed his canvas was now flat on the ground!

Appropriately, the barks are arranged geographically so as to map the country around Yirrkala. Further west, the collection assembled in Ramingining by Djon Mundine to become the ‘They meditate‘at MCA has now been restored in the Power Collection, which is part of the Chau Chak Wing Museum. A series of painted hollow log commemorative posts are also available in Milingimbi during the Makarraṯa 2016 ceremony, which was an event of peace between the local Yolŋu community and international museums that had ignored the art of Milingimbi for too long! Its success as a ceremony may have brought the concept of Makarrata into reflection at Uluru, becoming a key part of the Declaration of the Heart.

Finally, the ultimate museological cross-over takes place deep in the basement where contemporary art commissions will regularly find their place. Daniel Boyd’sFronton / Prevention ‘ is the first taxi in the row. The artist, of Gangalu and New Caledonian ancestry, spent months researching the museum’s various collections, eventually selecting a group of 19th-century plaster casts from the Nicholson collection of antiques, including one model of the Athenian Acropolis. For her commission, the artist veiled the entire Penelope Gallery in its characteristic points of light, creating a disturbing and eerie space. In this installation, transplanted and second-hand versions of Western civilization are recast, inviting other ways of seeing our past and future.

The excellent host for my visit was Indigenous Heritage Curator Matt Poll – also like Boyd of New Caledonian descent – the Watego family of fame from Byron Bay. Significantly, he had chosen Gadigal hooks for the case of the Home Ambassador.

And this turns out to be the main topic of ‘Bayala Nura: Land of wool’, which is the subject of his’mahn‘, dedicated to Sydney’s first female fishermen who plied the local bays and waterways for thousands of years, keeping both the locals and the sea in harmony. There is also an installation of 125 shields from across Australia arranged by artist Wiradjuri Jonathan Jones. Oddly enough, another man from Wiradjuri, Book Andrew, had much the same idea when the Australian Museum set up a branch, Djamu at customs over 20 years ago. His display of shields was quite memorable then. 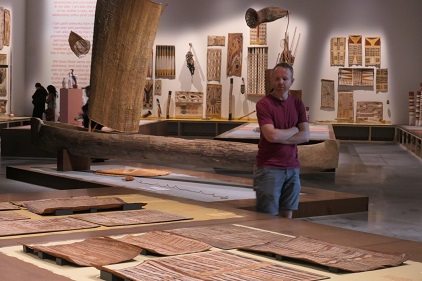 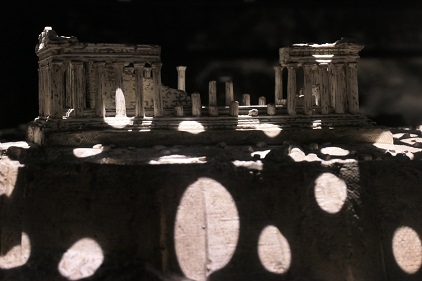 Daniel Boyd’s commission to open the Chau Chak Wing museum, questioning the university’s need to bring Western civilization from Athens with it