The third iteration of ‘The National’ “Showcasing the varied and essential work of Australian artists” opened at three venues in Sydney: Carriageworks, the Museum of Contemporary Art and the Art Gallery of NSW. Whether there is another one after the three biennial shows now ended probably depends a bit on how good this one is – although it should benefit from its chance to dodge last year and the thirst of viewers who results for visual stimulation.

I attended the press preview, of course, with a primary concern for First Nations content and I freely admit that I may have missed some of the power of non-Indigenous contributions. But the big picture that emerged was a) notable Indigenous works that, I note, have already made the headlines of ArtsHub review; b) a preponderance of female artists – 31 to 15 men, with the female hierarchy of the MCA in the lead; and c) artists of Asian descent play an important role – particularly at the Art Gallery, with its curator specializing in Asia, Matt Cox at the helm.

But by far my most visceral response was my discovery of Mulkun Wirrpanda’s recent death in c79. This senior yolŋu artist has been hard to ignore in recent years as she has curated fascinating exhibitions with English-born John Wolseley in which the two elders examined the nature of Arnhemland from their respective perspectives with great courtesy and intriguing crossovers. Her interest was in imparting her traditional knowledge of food resources – both the bush and the beach – and she apparently insisted that she be fed only on these after a heart attack earlier this year. His latest project with Wolseley, appearing in ‘The National‘, circled the eusocial world of its local magnetic termite mounds in which worker termites gladly shared their homes with a variety of other creatures, including meat ants and the red-browed pardolote bird.

Despite his recent death, Mulkun’s daughter and grandson joined John Wolseley in Sydney to pay tribute to his artistic life and his passion for revitalizing, maintaining and sharing Yolŋu cultural knowledge.

What a difference from other notable Aboriginal works. Another collaboration, between the improbable duo the dancer / choreographer of Broome, Dalisa Pigram and Vernon Ah Kee of Brisbane, often foment of texts, here director. ‘Gudirr Gudirr ‘ was a groundbreaking solo dance work by Pigram in 2103. Now she has reworked it, has been filmed in stop-motion, and has added angry or bitter words that are amplified by Ah Kee’s lyrics on three giant screens at Carriageworks. There are unnecessary film additions that lower the tension; but the heart of Pigram’s desperation can be summed up in his cry calling for a time “when suicide as a word in native languages ​​will be over.”

This anguished message surely deserved the size and the perfect darkness of its screens. But was sheer pruning still justified elsewhere in the Indigenous realm? I think Lorraine Connelly-Northey hits the mark with a huge mural lining up hundreds of her little wire works recycled as musical notation to sing along to. And the five months of efforts of Betty Kuntiwa Pumani from Mimili to encompass her mother’s 850,000 hectares’Antara‘The land on 10 yards of canvas was formidable in the MCA. But Betty Muffler and Maringka Burton’s collaboration on oversized canvases in the AGNSW Arrival Hall may have overstated the visual possibilities of their life story as ngangkari healers and the narcotic pitchuri plant flowering after the rain on the land of the Anamari / Caterpillar Tjukurpa.

Below, the great man of Badhu in the Torres Strait, Alick Tipoti, combines beautiful old linocut prints – one still 10 meters long – with new fiberglass dugong and shark ‘madhubal‘charms designed to attract the hunter’s prey. However, they seemed to me to lack the dramatic appeal of his early incised bronze sea creatures – like those currently on display at the Maritime Museum in Sydney. However, traditional opening weekend dances by the Tipoti family briefly brought TSI culture to life in Sydney.

Tipoti and the Muffler / Maringka team both have films about their professional lives showing on the I-Pads. Above, unfortunately, the work of Judy Watson hanging in the void suffers from the feeling of clutter of wash day at AGNSW.

Finally, films from the Karrabing Film Collective from around Wadeye, NT, which recently screened in New York. Their work lifts the veil on the realities of life in the unnatural communities that governments have forced on post-tribal people, and is worth a break from Carriageworks.

Did anyone mention COVID? Oddly not – although Fiona Hall greets us thoughtfully as you walk into the art gallery with ‘EXODUST‘, reminding us of how many floral and wildlife lives were lost in the 2019/20 fires. Darren Sylvester requires an equally detailed investigation into the realities behind his color and light fly traps in Carriageworks. And the 50,000 human cutouts of Mehwish Iqbal that flow along her ‘Gray Wall‘at MCA puts humanity on a par with the masses of the insect world in a provocative way. 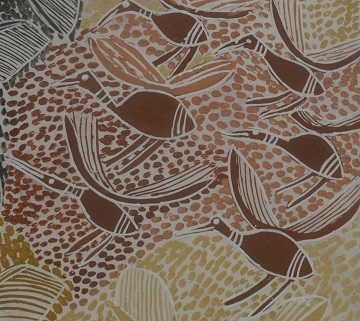 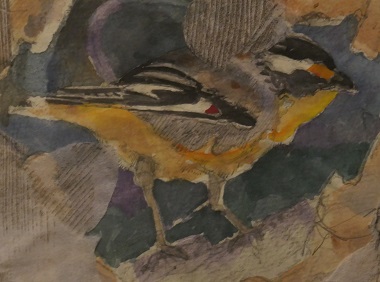