A few weeks ago I was at the Sydney Theater Company play, ‘Wonnangatta‘expecting to see an aboriginal play because the excellent Wayne Blair was half the cast. I’m stupid!

Now, I’ve been to the Belvoir Theater reopening for a play written by Kodie Bedford, which claims strong Gija family associations (maybe the Paddy crowd ???) and the cast stars wife Thitharr Warra (from Cape York) Chenoa Deemal and Bjorn Stewart from deep in Western Sydney. And, once again, I got screwed!

Because Bedford wrote ‘Damn! “like an interracial game in which indigeneity is not at all the priority. It turns out that Dawn, the central character (played sensational by Sacha Horler) has carelessly had black, white and Chinese partners, having children by all 3. So it is the relationship between these brothers and sisters, their mother and their grandmother that counts here, not the color of their skin.

Oh, and Deemal’s Bernadette has a native fiancé, Izzy – but that’s also almost irrelevant to the play.

But it is Bernadette who kicks off the game with a monologue intended for her therapist, explaining the frequent institutionalization of her mother, the replacement of her Nan by strongly Catholic values ​​and her appreciation of the frankness of its inhabitants. of Geraldton who weren’t kidding about political correctness. like they do in Sydney – where she is at college – and just called her “a black cat”!

And then we meet Blower Dawn, obsessively vacuuming, including her comaed mom, quite able to use that vacuum as a weapon, just as she is able to use words so crudely and brutally to shock, please and hurt others. Because this is the first reaction of everyone in this family as they gather for Nan’s departure – Bernadette, Chinese Marie (Shirong Wu), now, oddly enough, a WA farmer’s wife and mother. twins, and Sebastian (Alex Stylianou), the escapee in Europe, escaping both his sexuality and his failure as an opera tenor.

Timeless rituals are performed, memories are twisted, and Nan – played by the imperishable Valerie Bader – briefly resurrects and calmly reveals that she is happy enough to go “Sweet on that good night” when everyone clearly wants to. “To rage, to rage against the dying of light” (thank you Dylan Thomas). Izzy, the accountant, is quite shocked by all this eccentricity, especially when Dawn starts to kiss him.

But it wasn’t until they all got together in good old Catholic denominations that tears began to flow – encouraged by the surprising supply of jars from Mary and Aunt Mildred (Bader returned with his own bottle of whiskey and revelations about generations of family suicides) – that resolution seems possible. Watch out, Bernadette tries what mom calls “making a Virginia Woolf” and they are forced to conclude that “madness holds us together”.

So – a miserable night in the theater despite socializing much more masked than my STC experience just 4 weeks ago?

Not at all, it is often hysterical! A little too episodic in the second half, I guess. But if anyone is handing out acting gongs this wacky year, Sacha Horler’s almost exaggerated Dawn is an extraordinary piece of “crappiest comedy,” as the bard put it. He also said: “If it is madness, there is nevertheless method in it”. I think Kodie Bedford may have had that in mind. 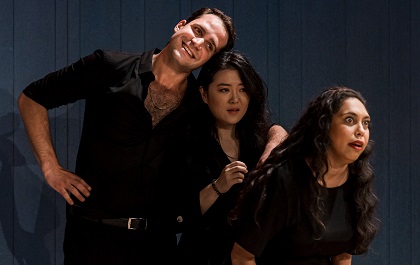 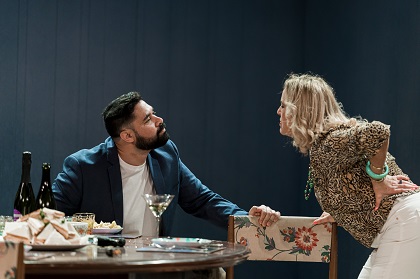