There are fascinating differences between the two great institutions of Canberra in the presentation of their First Nations collections. At the National Gallery, you can’t avoid the natives even if you hurry to make your reservation for the Big Show, From Botticelli to van Gogh‘. The more and more sacred “Indigenous Memorial” 200 silent lorrkon haunts the entrance; the First Nations galleries are by your side when you go up the escalators; and in front, in the main building, the new “Belonging” juxtaposes black and white images of the country. Even the big one ‘Know my name‘The exhibition of female art ends – or perhaps opens – with the contribution of indigenous women.

And there is still the fourth Indigenous Triennial – in fact another quinquennial – to come in November.

Meanwhile, above the lake, the National Museum seems to want you to work really hard just to find their First Nations galleries. Going up and down stairs or an elevator, outside and inside the building, unmarked then messy. Why would you want to place the currently trending Aboriginal fashion show, ‘Piinpi‘in the middle of a historical exhibition, I wonder? I remember the NSW Art Gallery traditionally kept the natives in its basement, although it promises to do an NGA when “Modern Sydney” opens: “Facing our original building through an art garden, the expansion should be completed in 2022 and will feature historical and contemporary works by First Nations artists,” promises director Michael Brand in ‘The art journal ‘.

Of course, most NGA visitors will be heading to these ‘Sunflowers‘in the large traveling exhibition of the National Gallery of the United Kingdom. Much more to delight, mind you – Rembrandt’s self-portrait, Turner’s sunset, Monet’s water lilies, El Greco’s Christ and an insightful portrait of the Russian-born man who launched the Gallery’s collection. But see if you can spot a wild horsewoman in a British hunting scene. Glorious stuff. It’s until June 14th and in my experience the timed box office makes viewing a delight – rarely a crowd, even in front of those shiny sunflowers.

The many specialized First Nations galleries of the NGA were once thematic. A couple have hung on, but they seem to have given up on trying ahead of a major revamp next year as part of the NGA’s 40th anniversary. It’s a mess right now – and, compared to the UK show and Women’s, it feels like no one even cares about the stakes of explanation. A wall of Ngkurr paintings – delightfully varied in style, probably differing according to membership in a linguistic group – is totally unrelated. Two Emily Kngwarreye from different eras are hung in different rooms. A timely Easter painting by Milingimbi is related neither to a trio of delightful sculptures there nor to a Hector Jandany ‘Ascension‘. Daniel Walbidi is hanged apart from the Yulparija ladies with whom his art is inextricably linked.

But there are treasures among the jumble. A Jack Keradada ‘Wandjinais the best I have seen from this family. And two of the remaining themed rooms have treasures – a rusty pewter mask from Alick Tipoti is really special; and an unusual seasonal Namatjira (Albert) stands out in the semi-darkness of the Hermannsburg watercolor room.

“Know My Name” is a rich selection of Australian female art – and that’s just part one! But the choices of First Nations seem selected by size – plus size, which is a much more prevalent problem as architects mount contemporary galleries by the meter rather than relate them to the walls of the houses for which so much art was actually intended. . Unfortunately, as a result, the central commission of personalities from Tjanpi recounting the ‘The story of the seven sisters‘loses much of the eccentricity that delighted the flying version in the avant-garde exhibit at the Margo Neale National Museum – now in Perth. They are just tall – and how many people are going to link the harassed sisters to their male priapic pursuer peeking out from behind a nearby tree?

Finally at the NGA, their hallway show “Belonging: Australian Art Stories” is described as “a major collector’s display tracing the history of 19th century Australian art.” Informed by the many voices of Indigenous and non-Indigenous cultures and communities, the exhibit reconsiders the history of Australia’s colonization ”.

I’m not sure he can really claim such an impressive result, but he certainly contrasts with the colonial vision of a lush country, increasingly populated by sheep and cows but absent from its First Peoples; missing his YawkYawk spirits found in the land of Kunwinjku; and denying his understanding of the seasons found in Shane Pickett’s Nyoongar calendars. But then we could compare Augustus Earle’s likeable Bungaree portrayal and John Glover’s charming Aboriginal cricketer with Ricky Maynard’s adamantine.Wik Elder‘and Christian Thompson’s sentimental self-portrait for the points of difference (and similarity) in the portrait. The declarative text of Vernon Ah Kee, ‘We grew up here“Explain any of these differences?

By comparison, this is a unique vantage point at the National Museum – once you find the First Nations Galleries. The basic documentation seems convincing; but the special exhibition of Margo Neale, ‘Talking about Blak to the story‘alone is worth a stimulating visit. She claims this shows that “Australian history did not begin in 1788; and aboriginal history did not stop there. Well, apart from the magnificent canvas of Uta Uta Tjangala, ‘Yumari‘(1981) with its multiplicity of ancient songs that crisscross the land of Tjangala – a canvas saved from oblivion having been rolled up for 20 years in NMA stores – there is not much to illuminate the first statement.

But the politics of survival are all around you. And it is presented exclusively by aboriginal voices, through their political campaigns, in the suffering and grief of massacre and deportation, in prisons and missions, and then through suicides, to take control of their own systems of health and even paint cars in traditional designs. . Names involved include Gordon Syron, Queenie McKenzie, Michael Cook, Dick Roughsey, Lettie Scott, Fiona Foley, Vernon Ah Kee, Gordon Hookey and Kevin Gilbert.

But the museum’s own policy also creeps in. Another painting was refused for many years – that of Queenie McKenzie.Stream of error‘- the story of a notorious Gija massacre in East Kimberley. Under a council appointed by the Howard government, this was seen as the “black armband” story, to be refused. Now the massacre is accepted, but a cautious caption states: “There is (still) a debate over whether the group of killers included Europeans”! 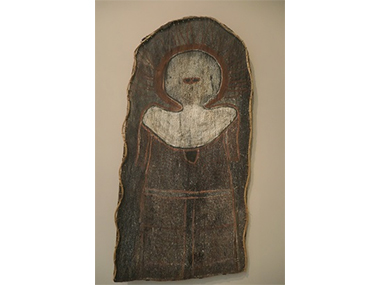 Queenie McKenzie’s controversial ‘Mistake Creek’ from 1997, was only allowed to be exhibited at the National Museum this year.