British electric motor developer Saietta is bringing production of its axial-flow motors back to the UK from China. The company originally planned to establish a pilot production line in the UK by 2024, but is now taking over an engine manufacturing plant in Sunderland previously operated by ZF Automotive UK, which closed the plant last year. last. Saietta plans to take over many of ZF’s 110 former employees.

Since 1999, the 8,000 m2 (86,000 feet2) has produced over 20 million motors for automotive applications such as power steering. SaiettaThe acquisition of includes four motor production lines and one circuit board production line. Much of this equipment can be reused to manufacture Saietta’s products.

Saietta intends to use the new facility to increase production of its proprietary axial flux motors for a variety of applications. Saietta will also relocate production of its e-Axle commercial vehicle transmission technology from China to Sunderland.

The number of engines produced at the site will be increased in phases, with the initial target capacity being 100,000 engines per year.

“This is a historic achievement for Saietta, providing us with a production plant in the UK more than two years ahead of schedule, further accelerating our ability to deliver our innovation to high-volume customers in around the world,” said the company’s chief executive, Wicher Kist. “In addition to the lease on the large premises in Sunderland, we are also acquiring car production lines and are ready to employ a fantastic and proven team with decades of experience in the manufacture of electric motors. 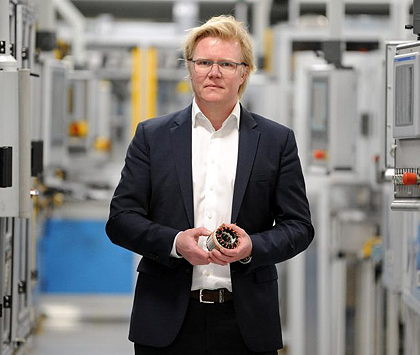 “The UK is a hotspot for electric powertrain innovation and we are committed to developing the engineering and manufacturing of our technology in the UK and exporting to mainland Europe and beyond,” adds Kist. “This is a very clear signal of our intent. Indeed, our stated ambition is to make this plant a model of electric motor assembly, fully ESG compliant and carbon neutral.

Saietta will offer positions to former ZF employees with skills such as manufacturing, engineering, IT, quality control, finance and process management.