‘Wirrkanja’, engraved image by Ngarralja Tommy May of a claypan near Kurtal, its waters flowing around rocks and caves

“Thanks to the Darwin crowd for this endeavor. Thank you. At last. I feel proud. I’ve tried my whole life, second, fourth, last all the time, sometimes nothing. But I have it now, today. My day, my time this year, I am the winner. At last.”

This is the glorious response of ‘Big Telstra’ winner Ngarralja Tommy May, 85, to his triumph in his third final appearance at the National Aboriginal & Torres Strait Islander Art Awards after many other appearances. This surely reveals how important this event is for artists; and how competitive they are to win a prize there.

Tommy May is a Wangkajunga and Walmajarri man, born in the Great Sandy Desert. He paints, dances and sings Kurtal, a ceremony relating to the principal jila / water point in his country. “I was grown up when I left my country. I was already hunting on my own, ”May was, in fact, one of the last of her people to come out of the desert to work on The Kimberley’s cattle estates around Fitzroy Crossing. Suddenly, he adds, “I know these stories and places in my country. I paint them now. I first saw paintings in caves. I learned a lot from people, mainly from my father and my grandfather. When I paint, I think about this.

Curiously, the prior art he created for his appearance at NATSIAA in 2001, for the Ngurrara canvas and for the Canning Stock Route exhibit was quite different. But in 2013, he attended a workshop with Melbourne artist Blak, Reko Rennie, received a posca pen and fluoro board to mark, and his development into a master of creating images of rain, rocks and sand dunes on Country with an endless variety of striped lines started. “My work is now like my drawing for engraving, directly on pewter, sometimes on wood, using a knife or a pen. I work everyday”.

And he has always been a proud promoter of the Mangkaja Art Center – which he helped found – becoming its vice-president as well as the president of the Kimberley Aboriginal Law and Cultural Center and being a director for twenty-one years of the Association. of Northern Kimberley. and Aboriginal artists from Arnhem.

Sadly, as NATSIAA judge Stephen Williamson, curator at the Alice Springs Araluen Art Center admits, “you really need to see Tommy’s work in his flesh – he just buzzes, he vibrates. And my colleague judge, the director of Injalak Arts, Donna Nadjamerrek told us that she could feel her country at work without ever visiting the deserts ”.

This year’s third COVID judge was Darwin-based artist Karen Mills – because, of course, the NT has resisted interstate visitors. Despite this, the NT’s Museum & Art Gallery received 258 admissions in March, just 50 fewer than last year. While Tommy May and young Cecilia Umbagai are from Western Australia, all of the other winners have an NT connection – however tenuous! For example, Jenna Lee may be living in Melbourne now, but she places great importance on her connection to Larrakia in Darwin. and may well be related to political sloganist Jason Lee, who also made it to the final for paperwork.

But Jenna won the Wandjuk Marika 3D Memorial Award for ‘HISTORY ships‘, a series of shapes created by reusing a children’s book,’The story of Captain Cook’s ladybug ‘ – pulp, cut and transform its pages into string to weave a pot. Why Captain Cook when the poor old sailor had virtually nothing to do with the colonization of Australia? “I was trying to understand all the celebrations planned for his 250th birthday,” Lee told me. “He’s a multicultural, multilingual nation, and I just thought he was British, he’s not me and I’m more Australian. So why not rewrite ‘national history’ boldly as a young, female, mixed race and queer – and proudly Australian! ”

Jenna Lee may be Japanese, Chinese, Filipino, settler, and aboriginal, but it’s the larrakia language that appears in most of her work – including clever work ‘Lyre bird‘, who was a finalist 2 years ago.

The only man to join the NT winners was Adrian Jangala Robertson from the wonderful Bindi Art Center in Alice for Disabled Artists. Its roaring red mountain scenery, which won the General Painting Award, is reminiscent of Billy Benn, another man from Bindi, the Macdonnell Ranges like large slabs of beef in the sky. “It’s just a small piece of work,” MAGNT shortlist and Indigenous curator Luke Scholes told me, “so it was a brave choice on the part of the judges. And I really want to acquire it for the Museum, along with the beautifully refined pearl of Tommy May ”.

Unlike the Robertsons, Iluwanti Ken of APY Lands’ Amata community won the Works on Paper Award for a 1.5 x 2.5 meter artwork, much larger than she had attempted before. ‘Walawulu ngunytju kukaku ananyi (Mother eagles going hunting)‘shows three fiercely protective birds in the sky over an impressionistic touch of Country – surprisingly done in ink. “His scale is so impressive,” Justice Williamson marveled. “And the energy of his storytelling. A real breakthrough for her ”.

“I just teach the kids so they can take over,” Ken told reporters.

Back in West Kimberley, Worrorra woman Cecilia Umbagai has Wandjina deep in her 23-year-old soul. It was enough to win the Emerging Artist Award, using traditional bark to paint a work that is not traditional. The head of the Wandjina is proud, but its body seems to be decorated with food resources. Umbagai explained this as a reference to the iconic boab tree with its trio of precious possibilities – water trapped in its trunk, its fruit to eat and its height to climb “to find your way home.”

Even younger than Umbagai, Siena Mayutu Wurmarri Stubbs is the 18-year-old daughter of a well-known AAD name – Buku Larrnggay manager Will Stubbs. Her maternal side is Gnambarr, but her award-winning multimedia work is a film set on a Shinkansen train in Japan! Does that make it “aboriginal art” ??? “It is certainly art made by an Aboriginal person,” replies the fiery; “So it can’t be rejected – even though I wondered if I should go in. And, although my poem does not refer to it, I think it enriches to know that I am indigenous ”.

Stubbs’ very personal verse was in part evoked by the death of his grandmother just before leaving on a school trip to Japan – although that was not mentioned either. Finally, in the almost forced silence of the purring of the high-speed train, passing 270 km / h to 270 km / h from villages and rice fields, she has time to think. And the result is very adolescent fear: “I’m not ready for the future; let me float here in the present “to avoid the” stresses of tomorrow. “As Stubbs has already produced a book of bird photographs Yolngu Matha (15 years old) and works in the Mulka studio in Yirrkala, she seems to be coping well with the stress today!

Finally, Best Bark, almost inevitably, also returns to Buku Larrnggay in the person of Marrnyula Mununggurr for the job, ‘Muṉguymirri‘. Although the title actually means “small pieces” – suggesting a simple description of the work’s appearance, small squares and rectangles of delicate color rather than the small forms of bark that have been the motif of his recent work. – his insistence with the press was that although “I change jobs, it is the same story of fresh water”. Is this then pure abstraction? For Luke Scholes, this is all part of the increasingly personal approach taken by women (including Siena Stubbs) to Yirrkala, “pushing themselves into unique categories.”

Again, however, Stephen Williamson warns that the work must be seen in the flesh. Even on the wall, he says, “it’s very inconspicuous – I really had to spend some time letting it sneak up on me, looking from different angles to see the 3D shape of a woven fish trap emerge. “.

Oddly enough, the judges must have compared Munungggurr’s work with that of his mother, Nonggirrna Marawili, which is a formidable vision of ‘Rough Gapu / Water‘- all the waves collide and the spray flies, and not a hint of pink, the color that has become too ubiquitous in Marawili’s recent work. They may also have been tempted by the much more traditional story of Dhuwarrwarr Marika – ‘Yalangabara‘- the famous beach where the founding sisters Djang’kawu landed and self-fertilized in order to generate the Dhuwa half of the Yolngu. This six part bark and larrakitj work is a mighty 2 x 3 meter – hard to miss and provocatively titled, ‘Birth of a nation‘- no, presumably a tribute to the racist DW Griffith film of the same name!

Coincidentally, it seems related to the title of my story, ‘The art of the nation ‘, the words used by producer Rhoda Roberts to promote this year’s NATSIAA. Increasingly, this seems a fair description of this gathering of the 65 finalists – no Tassie art, although the work was offered by a private dealer and may have been discriminated against, but all other states and territories were represented. And that included some very solid ceramic and ghost net work by Jimmy K Thaiday in the Torres Strait, reflecting the precarious state of the Barrier Reef.

How can I leave out the rich and intricate work of 90-year-old Ginger Wikilyiri or the extraordinary portrayal of young Bessie Daylight of her mother – Gija’s senior artist Betty Carrington – as an angel? Can you even imagine how 15 different members of the Tjala Women’s Collaborative managed to coordinate the huge and wild performance of their ‘Nganampa Ngurra‘? And while Tommy May picked up his posca pen, Dallas Smythe from Warakurna used a pyrographic pencil to make his burnt to walk image of an iron pebble plateau where the myth was made. Finally, a welcome return from Titus Nganjimurra – last year’s emerging Telstra artist with a cheeky photo of the Queen – this year, taking on the much more staid subject of the ‘Barramundi‘and switching from traditional Arnhemland X-ray imaging to deliver an almost perfectly realistic fish, with a wonderful spine core. 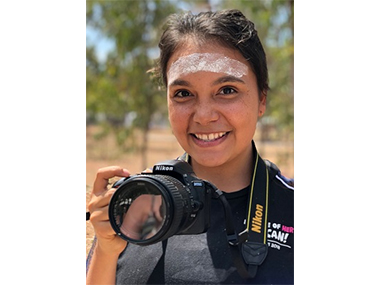 Young Siena Stubbs, back from Japan in “the community I love” in Yirrkala 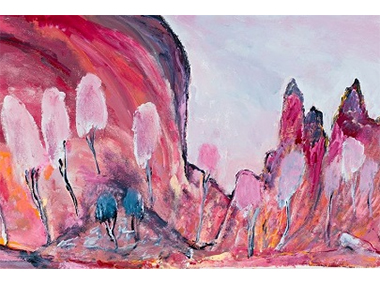