The first National Indigenous Fashion Awards were presented last night in Darwin (i.e. online) thanks to the Darwin Aboriginal Art Fair (also online), which promotes this sub-branch of the art First Nations for a few years now. And the main conclusion of the Aboriginal Art Directory is that almost all of the awards went to distant art creators who have translated their imaginations and skills into a different, more commercial arena.

33 First Nations fashion designers (as noted earlier) were nominated from across the country, and awards were given in six categories:

And the winners are;
Peggy griffiths, the matriarch of the Waringarri Art Center in Kununurra, for the Cultural Ornament and Wearable Art Award

Kieren Karritpul, the young artist and worker of the Merrepen Art Center, for the Textile Design Award

Ninti A, for the Environmental and Social Contribution Award

Mirawoong’s inimitable artist, Peggy Griffiths “Heritage robe” is made up of 10 layers of fabric, hand printed by local textile artists, hand painted by herself, and some left plain. Designs include the jilinybeng, or bush cucumber and boab nuts. Designer of the Torres Strait, Grace Lillian Lee worked on the design with Griffiths. Bendigo Art Gallery acquired the ‘Heritage Dress‘, and it will appear in the next exhibition, “Piinpi: Contemporary Indigenous Fashion”, opening September 5.

Tiwi Design is celebrating its 50th anniversary this year, so it is only fitting that its co-founder, Bede Tungutalum, is recognized with an award for his pioneering work in indigenous textiles. His first set of linen placemats won the Good Design Award in 1970 from the Industrial Design Council of Australia.

Ninti One, the social research organization won for its report, “Intellectual Property in the Creative and Cultural Industries of PNG”. They based their findings – which are also relevant in native Australia, on the revelation that you can tell where someone is from in PNG by the colors, patterns and shapes of the bilums. Their identity is literally woven into the ropes. 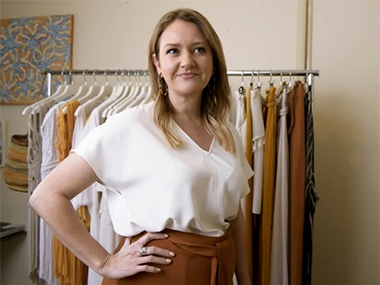 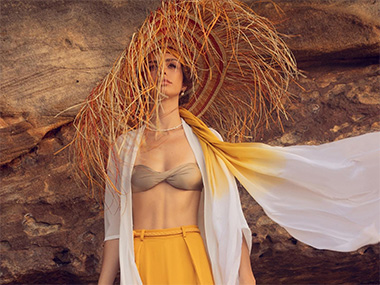