David Rathman AM has been appointed Ambassador of the Aboriginal Art and Cultures Center (AACC) in South Australia. Rathman’s LinkedIn profile reads as follows:

“Commercial broadcasting was part of my life journey and I have done voiceovers for documentaries for the past few years. I have been involved in community development and community capacity building through the power of people.

As a professional trainer, I developed innovation in learning to re-engage people who had lost touch with education.

As an education administrator and public administrator, I have worked for Indigenous students and students who are on the fringes of the mainstream, as an advocate and changing the thinking and practice of the system.

Cultural understanding and changing practices by organizing workshops have been an important part of my role in improving outcomes and ensuring that an inclusive mindset exists within the wider community. “

This is a positive step in the development of the center and will strengthen the participation of indigenous communities in its planning and implementation.

“David Rathman will be an outstanding advocate for the AACC, drawing on his knowledge of Indigenous cultures and his experience working with and for Indigenous communities through culture and history, education, health and community well-being. “

Mr. Rathman was born and raised in Port Augusta and is a proud descendant of East Aranda with family ties to the Kokatha, Arabunna and other indigenous nations of South Australia.

He says he’s thrilled to help bring the timeless stories of Indigenous cultures to the world at AACC.

“We will help people better understand the connection between Aboriginal people and the country, and their own connection, in terms of a cultural and spiritual journey over 60,000 years,” said Mr. Rathman.

“When people walk into our center, the Indigenous experience comes forward and embraces them. We want people to also feel a part of their journey and come back many times and bring their future generations. “

Mr. Rathman said that as an ambassador of the AACC, he would ensure that indigenous peoples continue to be represented at all stages of the development and operation of the center.

“This is a fantastic opportunity for Indigenous people to have ownership and leadership of what will become one of the state’s premier tourist attractions and to actively participate in this endeavor through business opportunities. business and career. There is a lot of enthusiasm for this center. 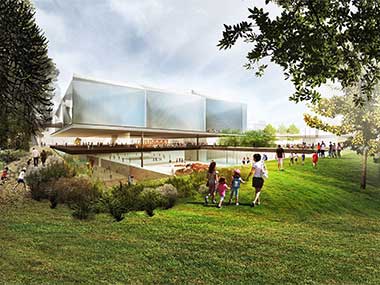 The winning design by Diller Scofidio & Renfro and Woods Bagot for the new Center for Aboriginal Art and Cultures (AACC) in South Australia.